KC Weightlifting is more than just a gym. With decades of experience both competing and coaching at elite levels, owner Anna Martin is determined to create great lifters AND great humans. Our personalized weight training instruction provides a unique, individual approach for athletes in Kansas City. With a focus on technique that is often complimented by competitors and industry professionals, our programs have produced countless individual success stories.

But training at KC Weightlifting goes beyond barbells, form, and function. Our tight-knit group of athletes push each other to be the best in every aspect of life. You’ll be instilled with a newfound sense of confidence, a knack for coaching and positively influencing others, and the ability to create goals and see them through. And as an added bonus? You’ll have a whole lot of fun doing it!

Anna has been involved in Olympic-style Weightlifting since age 14 and has been lifting for over 20 years. She has placed in the top three at every National Championships and American Open from 2001 to 2006, and won the Collegiate National Champion in 2005. In 2006 she was ranked number 11 in the US.

She lifted for the United States in Mexico City and Guatemala City and placed 2nd place in Mexico City’s Olympic Festival. In 2004 she was the first alternate to the Olympic Trials and in 2006 she lifted in the World Team Trials. Her all time best lifts are 80kg (176lbs) Snatch and 105kg (231lbs) Clean and Jerk.

As a coach, she has been able to coach at the Olympic Training Center in Colorado Springs and Marquette, MI. She then coached Team Wesley in St. Joseph, MO for a year and had 8 School-age National Champions and one girl that qualified for an International Weightlifting meet. Since then she has started her own team and has had over 30 National Champions and many best lifters. In 2008, she was named AAU Coach of the Year and was invited to coach the School-age Christmas camp and the head women’s coach that was held in Colorado Springs. More recently she was invited to Colorado Springs again to coach the School-age camp in March and April.

In June of 2014 she won Master Pan American Championships. And in September she won the 2014 Master’s World Championships in Copenhagen, Denmark.

In addition to her weightlifting experience, she was also a strength and conditioning coach at Tulane and Oklahoma State. 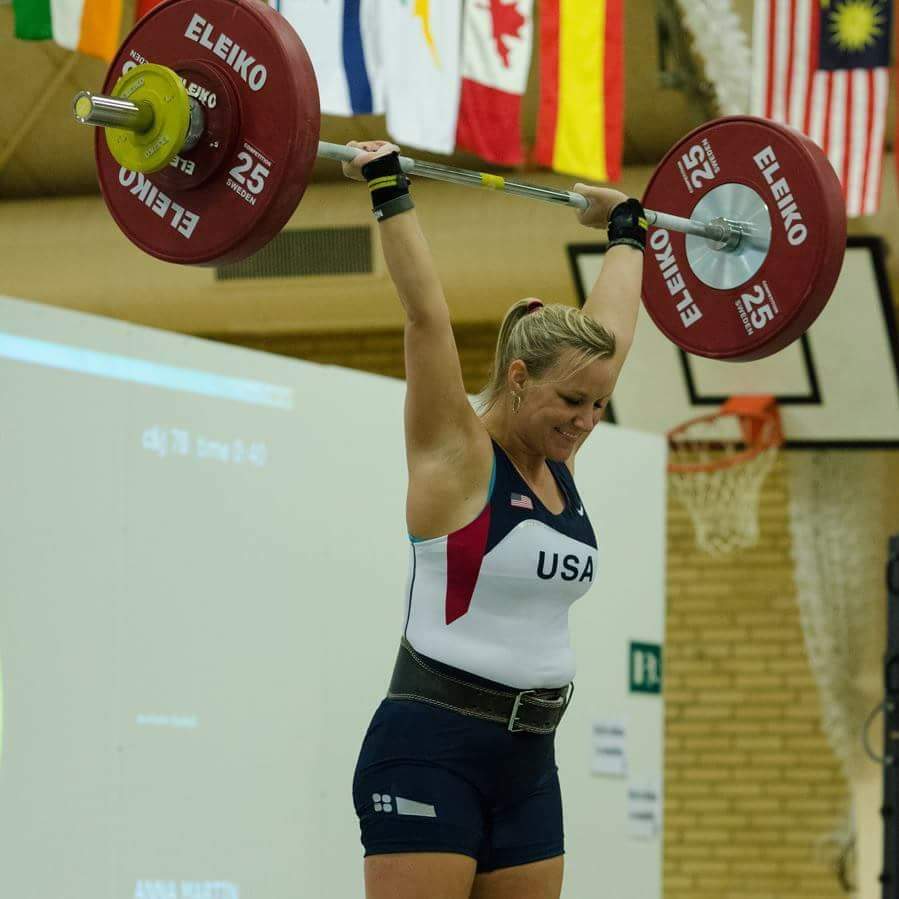 What Our Students Are Saying

Anna is a top notch coach. She really goes above and beyond for her athletes. Her gym is clean, has great equipment, and the community is friendly and helpful. Anna is extremely knowledgeable about the sport and helps people build confidence in themselves. If you want to improve technique, build strength, and improve fitness then KC Weightlifting is the place for you!!!!

Anna is a great coach! She knows how to push an athlete's limits in a safe and effective way. The community at this gym is amazing as well, joined a little over a month ago and everyone is so encouraging and friendly!

KC Weightlifting specializes in Olympic Lifting and has an emphasis on technique over the amount someone can lift, which is great (I wish more places were like that)! It's nice they also build custom strength and conditioning workouts tailored to each individual as well as people can join in & do Crossfit there whenever they want. Everyone's really friendly and welcoming!

The best place to put in some work. Coach is great and everyone in the gym is so supportive, no matter if you're just starting or if you compete. If you're looking for a gym workout, focus on form and techniques with a wonderful gym family, look no further.

It will be a year next week since I joined and I've never regretted a moment! I've been challenged in ways I never would have expected. Love Anna and the people I work out with.

I love coming here! I’ve made so many new friends and Anna is great!

Ready to start training? Our current offers will help you get moving!